Palestinian General Strike and Day of Action – Gaza Under Attack 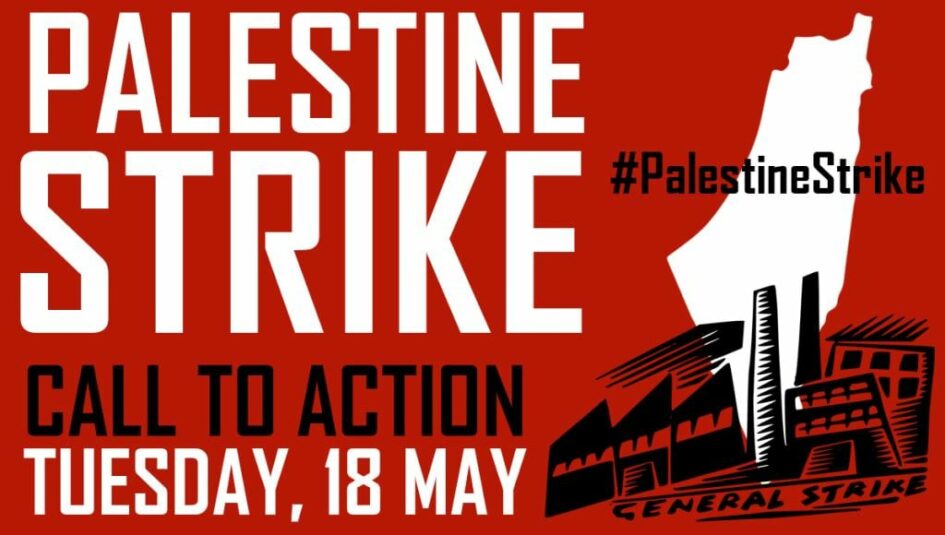 At the time of writing 212 Palestinians, including 62 children and 10 Israelis have lost their lives due to the assault on Gaza and the increase in Israeli human rights violations in East Jerusalem.

The provocative marches of fundamentalist and racist Israelis through Palestinian East Jerusalem, the planned expulsion of four Palestinian families in the Sheikh Jarrah neighbourhood, and the sequence of armed attacks on the Al Aqsa mosque during Ramadan were all directly responsible for the confrontation that emerged.

Over the last week the world has witnessed the massive bombing of the Gaza Strip, in violation of international law and leading to a bloodbath.

Israel’s allies in the USA and Europe permit Israel to act with impunity in continuing the slaughter by referring to their right to self-defense by Israel in reaction to the launching of rockets from the Gaza Strip.

International law does not permit the right to self-defence against an occupied people. Although we denounce all forms of violations of international law, we do not accept the double standard that a heavily armed state acts in self defence, and that Palestinians should just submit to war crimes, annexation and an apartheid politics.

The situation in East-Jerusalem and Gaza cannot be separated from the wider context of the occupation and de facto annexation: expansion of settlements, provocations, apartheid, repression, expropriation of natural resources and violations of human rights.

The relentless bombing of the Gaza Strip, erasing whole families under rubble, is being inflicted on over two million people who have already endured 14 years of a medieval type siege – being denied lack of access to food, medicine, water and essential public services like health and education.

Over the last week the airstrikes and bombing of the Gaza Strip is a clear example of the collective punishment of the civilian population, in clear violation of international law.

We deeply regret the tragic loss of both Palestinian and Israeli lives.

European Trade Union Network for Justice in Palestine condemns the intensification of the ethnic cleansing of Palestinians that has been the primary cause of the upsurge in violence. The massacres of hundreds of Palestinian civilians including children in Gaza, and the destruction of homes and infra-structure, is a deliberate escalation by the Israeli authorities to ensure that the policy of ethnic cleansing, and caging of Palestinians as in Gaza, can continue without resistance.

We call on the Israeli government to immediately stop the bombing and comply with international law. The illegal land, sea and air blockade of Gaza should be lifted immediately.

Today, May 18th, Palestinian unions and civil society organisations are calling for a general strike and a day of action in support of the Palestinian people and in opposition to Israeli human rights violations.

European Trade Union Network for Justice in Palestine supports this day of action, in the spirit of international trade union solidarity, and calls for support by the European and worldwide trade union movement.

We call on all trade unions to take actions and exert pressure on national and European governments to :

We call on the international and in particular the European trade union movement to plan for concrete measures that they can implement, to help bring an end to Israeli human rights violations against the Palestinian people.