The situation of Palestinian workers – testimony 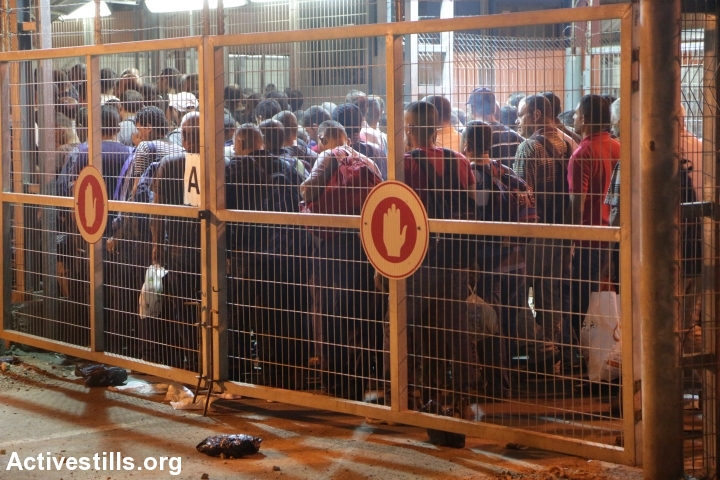 Intensification of violence and intimidation

Even when Palestinian workers are able to access their workplace, they are being increasingly subjected to violence and discrimination.

On April 12 2022, 37- year-old Abdallah Srour from Hebron was killed by Israeli police at his workplace in construction in the city of Ashkelon. Abdallah was one of over 27 Palestinians killed by Israeli soldiers in less than a month. My father, who works in Israel, told me that he and his fellow Palestinian workers are feeling increasingly unsafe in the workplace and in public spaces. This is especially true when they use public transport to move from one place to another, as they are frequently verbally -and sometimes physically- assaulted by certain Israeli passengers .

The district of Jenin in particular has been bearing the brunt of Israel’s collective punishment measures. The city of Jenin has been under an economic siege and Israel has intensified its restrictions on workers from Jenin as showcased by the increase in the number of military checkpoints. Al-Jamala checkpoint was closed in order to block the access of Palestinian citizens of Israel to the city and the flow of Jenin inhabitants to Israel.

Israel is scapegoating Jenin, a main stronghold of resistance in the West Bank, and is collectively punishing workers as well as their families in order to maintain the image it’s constructed of itself as an insurmountable power. Israel needs to engrave this image in our mind to obliterate the spirit of resistance. In turn this serves Israel’s settler colonial project which consists in taking over our land whilst ignoring our existence.

More than a half of the Palestinian workers, who work in Israel or in illegal settlements, are denied a work permit. As mentioned in the ILO report, in 2021, some 30,000 to 40,000 Palestinians worked in the country without a permit.

This forces them into illegal and potentially dangerous work. This also entails that those with working permits have very little agency and cannot require basic labor rights as they are under the constant threat of getting their work permit. Indeed, a working permit can be annulled at any time, especially when workers demand their rights, try to unionize, or if they (or one of their family members) engage in any kind of political activity. Those who don’t have permits are in an even more precarious situation as they can easily be fired if they dare to protest their employers’ exploitative practices. Because they are considered illegal workers who enter Israel through illegal routes -the open parts of the Wall- they have no security whatsoever and are at the mercy of their employer’s discretionary whims. In practice, the working permit system forces Palestinian workers to live in an Orwellian world of surveillance, subjugation and capitulation.

In October 2007, eighty Palestinian workers in Seoul Orr went on an open strike. Seoul Orr is one of the seven factories located in the industrial zone of Nitzani Shalom illegal settlement that was built on land confiscated to Palestinian families of Tulkarem. The factory recycled household natural gas cylinders, and manufactures bromine gas for land sterilization. The workers went on strike to protest dangerous working conditions and violation of labour rights (lack of protection materials and measures, prolonged and underpaid working hours). Seoul Orr was described by Israeli media as a slave market, where workers were even denied access to the toilet because there was not any. Five Palestinians died due to the dire working conditions in that factory.

The strike lasted 8 months. During that period workers didn’t receive any salary. They were supported in their struggle by the Food Industries and Agriculture union in Tulkarem and grassroots activists. One of them, Mohammed Blaidi – now the general coordinator of the New Unions – received threats from officials in the Israeli intelligence to halt the strike. Despite this, the workers continued their struggle until the factory became bankrupt and closed in 2010.

Demands of Palestinian workers were transferred to the office of national insurance. As a result they received 5 million Shekels as compensation. Following the change of management, the workers in Seoul Orr now work for 8 hours per day and are paid according to Israeli law. They also have paid sick leaves and holidays and are provided with the protection measures they need. Seoul Orr became the only factory that made a pension fund of 750 shekels/month for its workers.

After this victory, grassroots activists who led the strike decided to create the Palestine New Federation of Trade Unions. The goal of New Unions work (which is mainly voluntary) is not just to improve the workers’ working conditions, but also to make them break free from the shackles of intimidation and capitulation.

Since its creation, the New Unions has drawn on the connection between the ruthless exploitation of workers by Israeli employers and Israel’s three-tiered system of oppression: settler colonialism, apartheid and military occupation. We continue to organize and unionize workers to acquire their rights while emphasizing that our struggle is not just a class struggle but an anti-colonial one. This is the role that trade unionization in Palestine must play and has historically played since the British colonial rule and creation of Israel.

The New Unions organizes Palestinian workers (both formal and informal) working for Palestinian employers, as well as in Israeli corporations on both sides of the Green Line. Due to the Israeli blockade of Gaza and the isolation of Jerusalem from the rest of the West Bank, the New Unions are unable to unionize workers in these two areas.

Trade unions across the world can play a key role to support the struggle of workers in particular and the Palestinian people at large by: