Take a stand for justice in Palestine! Question your candidates for the upcoming European Elections 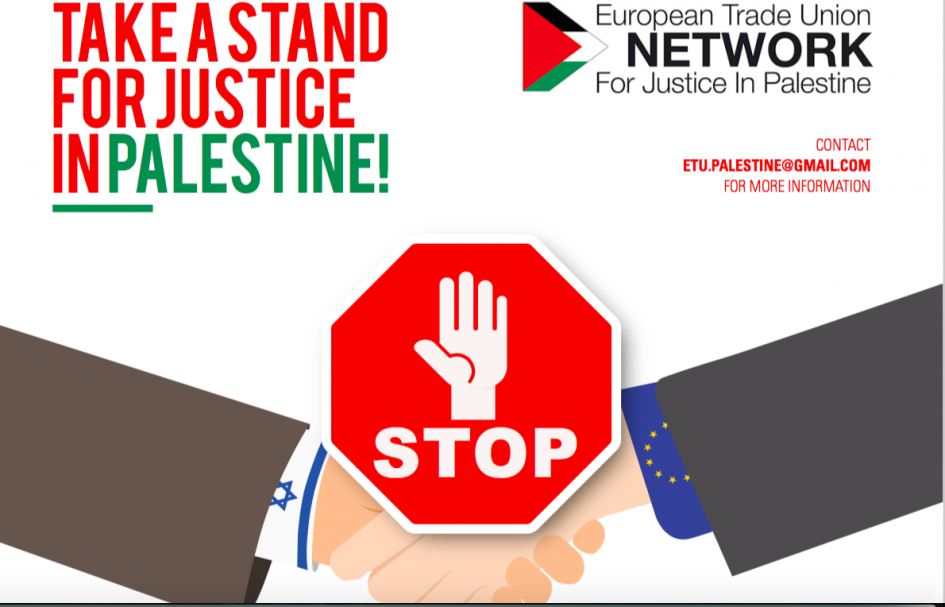 For us, as trade unionists standing in solidarity with Palestinian workers, the following aspects are crucial:

Israel’s policies of continued house demolitions, ethnic cleansing, expansion of illegal settlements, imprisonments and killings of Palestinian people, including children, in flagrant violation of international law are very well known and documented. However, European companies and governments continue to arm, sustain, finance and perpetuate Israeli crimes against the Palestinian people. Our governments and the EU are making contracts and giving money to Israeli arms companies. Therefore, we as Europeans are deeply complicit in Israel’s crimes against the Palestinian people.

Israel is associated with the European Union through its Association Agreement. The Agreement grants Israel preferential access to European markets, allows Israeli ministries and weapons companies to receive EU funding and provides Israel with the political support it needs to carry out its crimes against the Palestinian people. This comes in violation of Article 2 of the Agreement which states that: “Relations between the Parties… shall be based on respect for human rights and democratic principles..” Suspension of this agreement is a European responsibility.

Challenging local, regional, and national politicians on their position on European complicity with Israel’s crimes against the Palestinian people is an act of solidarity and a refusal to condone such complicity. In the run-up to elections, therefore we are calling on the European trade unions and workers to ask some of the following questions to their European candidates:

1. Will you oppose any upgrade of European agreements with Israel and call for the suspension of the EU-Israel Association Agreement until Israel abides with international law?

2. Will you support the demand for the EU and European states to meet their obligation under international law as recommended by legal experts1 and end all economic transactions with illegal Israeli settlements?

3. Will you support the release of UN database of companies complicit in illegal Israeli settlements?