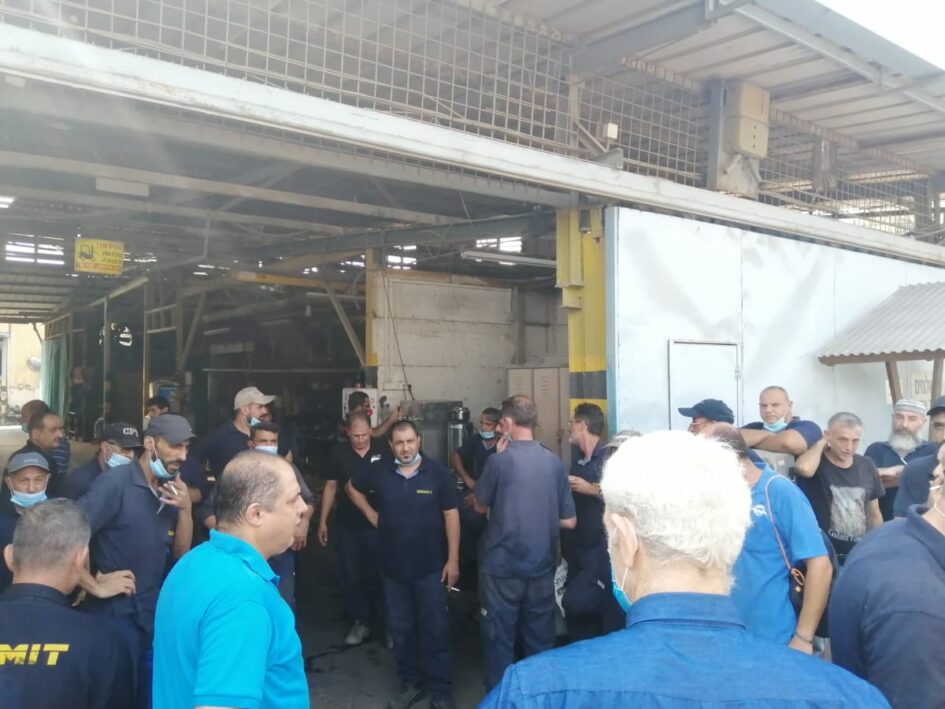 75 Palestinian workers at the Yamit Sinon filtration factory started an open ended strike on 31 December last year, following months of refusal by the employer to negotiate seriously with the workers.

Negotiations over low wages, pensions and the right to a collective agreement started in February 2020, but workers were forced to take strike action when the employer not only refused their demands, but threatened to reduce the salaries of a number of long-serving workers.

Although the Nitzanei Shalom industrial zone is in the West Bank, the Israeli labour courts will only recognise trade unions based in Israel for collective bargaining purposes. As a result of these restrictions most Palestinian workers are not organised.

Employers at the factory finally agreed to respond to the union’s draft collective agreement, at a second hearing at the labour court in Jerusalem at the end of December. However, it took further pressure before the company responded with a total rejection of the workers demands.

Early January the CEO of the company refused to accede to the demands of the workers and stated a declaration that Israel belongs only to the Jewish people. Afterwards he excused him for this statement.

The Steering Committee of European Trade Union Network for Justice in Palestine has written to the company demanding negotiation and dialogue with the workers. Workers demands are elementary in any state of law.

On behalf of European Trade Union Network for Justice in Palestine we wish to wholeheartedly express our support to the striking workers at Yamit Sinon. They have our determined solidarity, and we will highlight the exploitation and the injustices the workers are enduring, and which they are struggling to overcome. We applaud the support they are receiving from Maan Workers Association and the Palestinian New Federation of Trade Unions.

We know only too well that their struggle against inhumane working conditions, and an uncaring employer, is part of all our struggles. We are also very aware that the impoverished conditions these workers suffer, and that all Palestinian workers endure, is a direct consequence of the occupation, and in our expression of solidarity we join with them too in a call for the illegal and violent military occupation to end.

On January 20, the workers had a first result of their strike and a draft agreement but discussions will be continued the coming months. Our network will follow up on further developments.