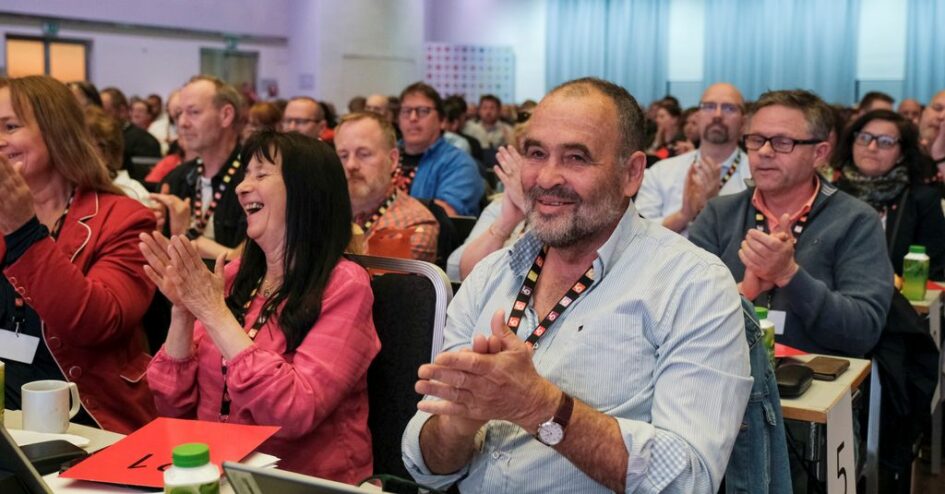 Norwegian Confederation of Trade Unions (LO) at its congress held on 2 June 2022 decided, by a large majority, that LO would support an international boycott of Israel. This declaration sets LO’s policy towards Israel and the Palestinians for the next three years. The congress adopted a list of 14 concrete measures intended to hold Israel to account for its violations of international law and reaffirmed its support to BDS.

The LO Congress (with over one million members) referred to Israel as an apartheid state and demanded that the Norwegian government support the UN inquiry to Israeli apartheid.

“The Palestinian civil society is asking for an international boycott of Israel. Our trade union followed the call from Palestine already in 2013 and the LO congress approved it in 2017. Boycott of Israel is needed now more than ever, especially in the context of international sanctions on Russia”- said Stein Guldbrandsen from Fagforbundet ( The Norwegian Union of Municipal and General Employees

In its resolution Norwegian Confederation of Trade Unions protests against Israel’s terrorist listing and criminalisation of internationally recognised Palestinian human rights organisations in an attempt at stopping documentation of human rights violations.

“The Norwegian government must demand that Israel immediately remove these organisations from the terrorist list and stop using threats and harassment, including arbitrary criminalisation and repression of Palestinian organisations” – the unions say.

“The international Criminal Court (ICC) has launched a criminal investigation into crimes against humanity committed after 2014 in the West Bank, East Jerusalem, and the Gaza Strip. The Norwegian government must insist that the new Israeli coalition government respect the ruling of the ICC. Israel must treat all persons living in Israeli territories as equal with equal rights” – the resolution reads.

14 measures adopted by the LO Congress to hold Israel accountable for its violations and end Norwegian complicity:

• Prohibition of arms trade with Israel. This entails a ban on the sale of weapons, military equipment and multipurpose materials, as well as against providing related services.

• Norway must decide on a legal ban on the trade in goods and services from companies that contribute to violations of international law and human rights in occupied territories. This will be in line with Resolution 2334 of the UN Security Council.

• LO urges the Norwegian authorities to ensure that Security Council Resolution 2334 is followed up with targeted measures and sanctions in response to Israel’s violation of international law and non-compliance with UN resolutions.

• The Oil Fund and financial institutions must comply with the UN Guiding Principles on Business and Human Rights, which stipulate an elevate requirement for due diligence requirements in conflict areas.

• The Oil Fund and financial institutions must withdraw their investments from companies that contribute to the maintenance of illegal settlements and are part of the occupation economy.

• The so-called Oil Fund (Government Pension Fund) and Norwegian companies must refrain from all trade and investments in companies that have or contribute to activities in occupied Palestinian territory.

• International pressure on Israel must be increased, with a combination of strategic pressure and demands for dialogue and peace negotiations.

• Norway must actively work to ensure that persons suspected of apartheid crimes are investigated and prosecuted.

• Norway must work actively for full compensation to victims of human rights violations and crimes against humanity.

• LO demands that the Norwegian government call for a UN investigation into Israel’s apartheid crimes so that the state of Israel is held accountable.

• LO urges the Norwegian government to take an active role in making Israel financially responsible for the massive devastation that has hit civilians, infrastructure and public services during the Gaza wars.

• Norway and Norwegian oil companies must refrain from cooperating with Israel in oil and gas projects in undeclared and disputed areas.